This article is about the visible spectrum. For all other uses see: Spectrum (disambiguation) 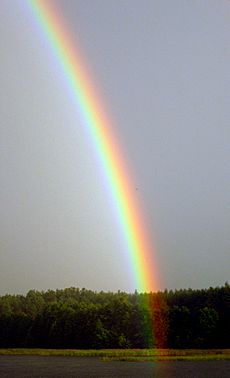 The spectrum in a rainbow

A spectrum, plural: spectra, is a band of several colours: violet, indigo, blue, green, yellow, orange and red. A spectrum can be seen if the Sun's light is passed through a prism and allowed to gather on a white screen. This visible spectrum is part of the larger Electromagnetic spectrum.

A natural example of a spectrum is a rainbow. The word spectrum was first used by scientists studying optics. They used the word to describe the rainbow of colors in visible light when separated using a prism. The spectrum seen when light passes through a prism is an example of the dispersion of light. The material from which the prism is made has a different refractive index n than air. Usually, nprism is greater than nair, and nair is taken to be approximately one. This implies that light travels a little slower in the material of the prism than in the space surrounding it. The angle of refraction can be determined from the angle of incidence and the refractive indexes using Snell's law.

The reason why the white light separates into in its component colors instead of remaining white is because the shorter wavelengths are refracted, or bent, more than the longer wavelengths. Thus, red, having the longest visible wavelength, will appear closest to the line perpendicular to the surface of the material (the normal), that is, it will be bent the least. Violet light, with the smallest wavelength in the visible spectrum, will be bent the most. The rainbow produced will always be in the same order: red, orange, yellow, green, blue, indigo, violet.

All content from Kiddle encyclopedia articles (including the article images and facts) can be freely used under Attribution-ShareAlike license, unless stated otherwise. Cite this article:
Spectrum Facts for Kids. Kiddle Encyclopedia.