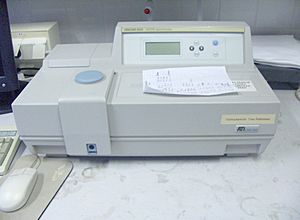 In short, the sequence of events in a modern spectrophotometer is as follows:

Spectrophotometers can also measure luminescence. For example, the machine can shine ultraviolet light of one frequency on the sample. This will excite the sample and make it glow. The detectors can then measure the light glowing from the sample at a different frequency.

All content from Kiddle encyclopedia articles (including the article images and facts) can be freely used under Attribution-ShareAlike license, unless stated otherwise. Cite this article:
Spectrophotometer Facts for Kids. Kiddle Encyclopedia.