Kids Encyclopedia Facts
Not to be confused with Springfield Union Station (Massachusetts). 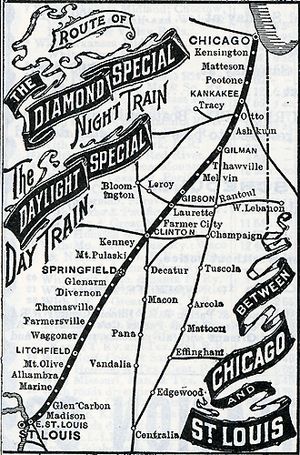 Springfield Union Station was designed in the Richardson Romanesque style in 1896 as a combined passenger terminal for several railroads serving Springfield, including the Baltimore and Ohio Railroad, Chicago, Peoria and St. Louis Railroad, Illinois Central Railroad, and the St. Louis, Peoria and Northern Railway. Although the structure was intended to be used jointly by these railroads, the Illinois Central was the predominant carrier, and the architect was Illinois Central chief architect Francis T. Bacon. The station was built in 1897-1898 at a cost of $75,000, and opened for business on January 2, 1898. During its 73 years of active service, the station carried substantial passenger train traffic to and from Chicago, St. Louis, and other cities.

Baltimore and Ohio passenger service through Springfield was secondary in nature, with service over one line from Indianapolis and Decatur to Springfield, and over a second route between Flora, Pana, Springfield and Beardstown. The B&O had been one of the original tenants in Springfield Union Station, but after purchasing the Alton Railroad in 1931, B&O trains were shifted from Union Station to the former Chicago and Alton station. The Indianapolis service was discontinued west of Decatur during World War II, leaving only a single motorcar train serving Springfield on the Flora to Beardstown line. Following the sale of the Alton Railroad to the Gulf, Mobile and Ohio Railroad in 1947, the B&O motorcar train briefly returned to Springfield Union Station before being discontinued on March 24, 1951. 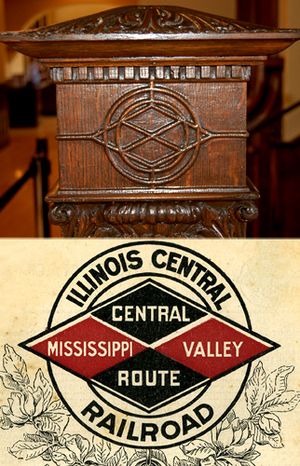 Illinois Central's influence is still visible throughout the structure. One example is the detail trim on the wooden stair railing, crafted in the outline of the Illinois Central logo which was in use in 1898.

Springfield Union Station is one of five significant rail terminals which served Illinois' capital city, and it was constructed in a far more ornate architectural style than the more utilitarian design of the other stations (Gulf, Mobile and Ohio, Great Western, Wabash, and Illinois Terminal.) The station was operated as a stub-end terminal by Illinois Central, and passenger trains backed into the station using now removed trackage which extended east along Madison Street to the Illinois Central mainline. This awkward operating arrangement reflected the original Illinois Central configuration with Springfield as an endpoint terminal rather than an intermediate station along a route.

One of the more prominent features of Springfield Union Station was a three-story (110 ft; 33m) clock tower. The tower made a striking addition to the Springfield skyline, helping the station become an immediately recognizable landmark. The hands on the clock faces were removed in 1936 as an economy move to avoid maintenance of the clock mechanism, and the tower was removed down to its base during the summer of 1946.

After passenger train service ended, Union Station housed several private businesses before being used for Illinois state offices until September, 2004. The building was extensively restored as the Abraham Lincoln Presidential Library visitor center, which reopened in March 2007. As part of the $12.5 million restoration project, the clock tower was rebuilt, substantially returning the station to its pre-1936 appearance. Although the visitor center function was later discontinued, the station continues as an integral part of the ticket-access Lincoln Presidential Library, housing exhibits and audiovisual presentations about Lincoln's life. An admission fee is charged.

All content from Kiddle encyclopedia articles (including the article images and facts) can be freely used under Attribution-ShareAlike license, unless stated otherwise. Cite this article:
Springfield Union Station (Illinois) Facts for Kids. Kiddle Encyclopedia.