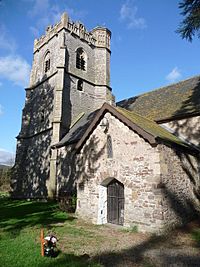 Porch and Tower of the church at St. Brides, Church in Wales.

St. Bride's or St. Bride's Wentloog (Welsh: Llansanffraid Gwynllŵg) is a small hamlet to the south west of the city of Newport in South Wales.

It lies in the parish of Wentlooge and electoral district (ward) of Marshfield. Like most of the settlements on the Wentloog Level it lies on land behind the sea wall, reclaimed from the Bristol Channel, and criss-crossed by large and small drainage ditches, known locally as reens.

The village and church of St. Bride's, Wentloog is dedicated to St. Bridget.

St Brides church is an ancient building of stone in the Decorated and Perpendicular styles, and consists of chancel, nave, south porch and an unusually fine perpendicular embattled western tower containing 6 bells, four of which are dated 1734 and bear inscriptions. A plaque inside the porch marks the high-tide level of the Bristol Channel floods of 1607.

All content from Kiddle encyclopedia articles (including the article images and facts) can be freely used under Attribution-ShareAlike license, unless stated otherwise. Cite this article:
St. Brides Wentloog Facts for Kids. Kiddle Encyclopedia.