Prior to 1870, residents of Lot 11 traveled to St. Anthony parish, Cascumpeque, a journey which involved a ferry crossing and nine miles travel over land, or in winter time, a horse and sleigh ride across the ice. In 1868, under the guidance of their first priest Rev. James Aeneas McDonald (1820- ?), the Catholic settlers of Lot 11 started construction on the church. It was completed in 1873, although by Christmas Eve 1870, construction was far enough advanced that midnight mass was offered on a temporary altar.

The name for the church was chosen due to the predominantly Irish pioneer settlement of the area. St. Brigid was a 5th Century Irish saint.
In 1914 a sacristy was added to the church.
In 1931 the spire was struck by lightning. During the repairs a new copper cross was added.
Since 1982 there has been no resident priest. Services are conducted by Fr. Danny Wilson, Pastor of St. Anthony's, Bloomfield, PEI.
In 2003 the church was officially recognized as a Registered Historic Place under the Heritage Places Protection Act of Prince Edward Island.

Since 1870 the church has held an annual picnic every summer. 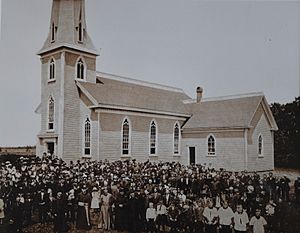 Opening of the new sacristy 1914

. The builder was Jeremiah Dalton. The church has a Gothic Revival style with a central tower capped with an elaborate pointed spire topped with a cross. The roof of the spire has decorative high narrow dormers on each of its four sides. Extensive renovations were made to the building in 1913–14, when a side vestry was added.
The church measures sixty feet in length by thirty feet in width. The walls are 22 feet high. The interior is completely covered in wood paneling. Two stained glass windows decorate the altar, one depicting St. Brigid and one depicting St. Patrick.

All content from Kiddle encyclopedia articles (including the article images and facts) can be freely used under Attribution-ShareAlike license, unless stated otherwise. Cite this article:
St. Brigid's Church, Prince Edward Island Facts for Kids. Kiddle Encyclopedia.