Kids Encyclopedia Facts
This page is about the church in Detroit. For the church in Wake Forest, North Carolina, see St. Catherine of Siena Catholic Church. 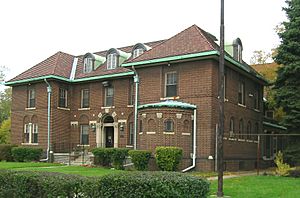 The St. Catherine of Siena Parish complex consists of four buildings: the parish school (1913), convent (1926), rectory (1926), and the church itself (1929). All buildings are basically Romanesque in style, with some Byzantine elements.

The church is the most visually catching structure. It is built in the form of a Latin cross, of mixed red and brown tapestry brick. The main façade has a gable form with a Romanesque arcaded portico containing the entrance and three tall windows above. A wheel window is placed in the pediment. Single-story wings with entrance doors flank the front, and a tower is located on the right side of the building.

All content from Kiddle encyclopedia articles (including the article images and facts) can be freely used under Attribution-ShareAlike license, unless stated otherwise. Cite this article:
St. Catherine of Siena Roman Catholic Church Facts for Kids. Kiddle Encyclopedia.