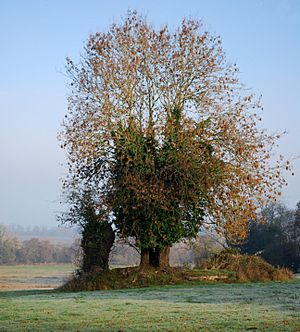 The ruins of St. Edmund's Chapel are located in a field to the east of the village of Lyng in the English county of Norfolk.

The chapel was part of a Benedictine nunnery. It is unknown when the chapel was built, but the nunnery was transferred to Thetford in 1176. The chapel was not abandoned until at least 1250, and a fair was held on the site by the Prioress of St. George's Priory, Thetford in 1287. The nuns retained a messuage and 90 acres (36 ha) of land at Lyng, paying for a chaplain to service the chapel from the profits. A lawsuit is recorded in 1438 between the prioress and the rector of Lyng, after which date the land was transferred to the village church.

There is a reference to the chapel in the Bodleian MS 240. This dates from the 1370s, when in the space of five years there were seven miracles connected with the chapel. These mostly involved incidents in the surrounding villages, such as Bylaugh, Scarning and Sparham, but one involved a man from Kent whose wife was cured of paralysis.

The chapel was in ruins by 1730. The brickwork in the remaining ruins is probably fifteenth century in date, and it is possible that the site remained in use until the Reformation, possibly as a chapel of ease for the hamlet of Lyng Eastaugh to the east. The ruins of the chapel which remain are described as "fragmentary" although Nikolaus Pevsner recorded a surviving arch during the 1950s, possibly the north doorway. Only part of the arch remains, and the ruins are largely obscured by vegetation. Objects ranging from Roman to post-medieval in date have been found on the site. During the 19th century human skeletons were found between the chapel and the road to the south.

All content from Kiddle encyclopedia articles (including the article images and facts) can be freely used under Attribution-ShareAlike license, unless stated otherwise. Cite this article:
St. Edmund's Chapel, Lyng Facts for Kids. Kiddle Encyclopedia.