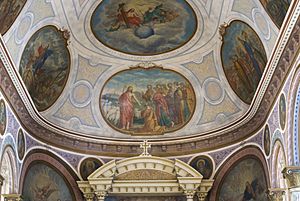 Built in 1892, St. Francis Xavier is one of the tallest churches in Montana, and the tallest in the city of Missoula, and in Missoula County. 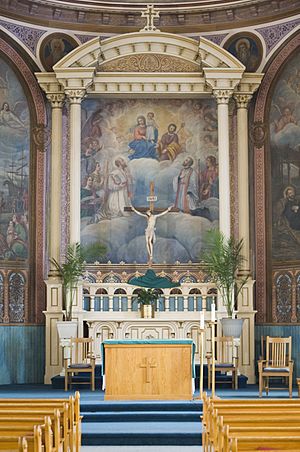 Altar and crucifix on the northern wall at St. Francis Xavier Church

The first St. Francis Xavier Church was built by Jesuits in 1881. In 1888, a Jesuit Priest named Father Diomedi arrived and hired an architect from Portland named Mr. Blanchard and a contractor from Missoula, Montana named Patrick Walsh. The church was designed to hold 600 on the main floor and another 150 in the choir loft. A description of the church can be found at www.sfxmissoula.com

When the church was built in 1892, it became the largest church in Montana. It is a cruciform church in the Romanesque Revival style. The arches over the windows and doors are semicircular, and there are smaller arches along the eave line, small buttresses, and a bell tower. Jesuit lay brother Joseph Carignano (1853–1919), who also painted the frescoes at St. Ignatius Mission, painted the interior. The church also has stained glass windows, a pipe organ, and a 2,270 pound church bell dedicated to Jesuit missionary Father Lawrence Palladino.

All content from Kiddle encyclopedia articles (including the article images and facts) can be freely used under Attribution-ShareAlike license, unless stated otherwise. Cite this article:
St. Francis Xavier Church (Missoula, Montana) Facts for Kids. Kiddle Encyclopedia.