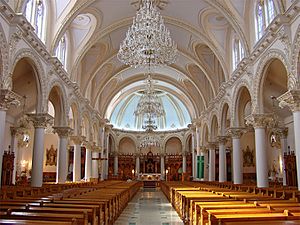 A pro-cathedral was built prior to the request of Bishop Jean-Charles Prince of the Roman Catholic Diocese of Saint-Hyacinthe, but the building was not solid. During the 1870s, the bishop had to move to Saint-Mathieu-de-Beloeil.

The construction of the current building was ordained by Bishop Louis-Zéphirin Moreau. Its architect is Adolphe Lévesque, who fulfilled a contract for $50,000. It was dedicated in honour of St. Hyacinth (Saint Hyacinthe), confessor Dominican who died in 1257.

All content from Kiddle encyclopedia articles (including the article images and facts) can be freely used under Attribution-ShareAlike license, unless stated otherwise. Cite this article:
St. Hyacinth's Cathedral Facts for Kids. Kiddle Encyclopedia.