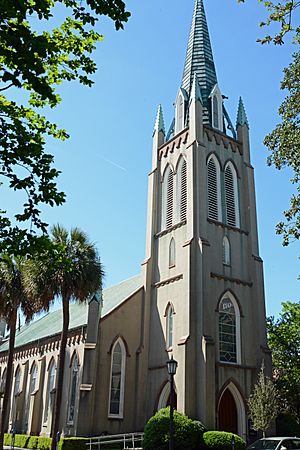 St. John's Church in Savannah is a parish of the Episcopal Diocese of Georgia.

The church was formed in 1841 from the growing Christ Church, Savannah, as part of a plan to increase Episcopal presence in Georgia and to provide for a first bishop of the diocese. In addition to his Episcopal duties, the bishop would be rector of both St. John's and Christ Church. Stephen Elliott, Jr. was consecrated as Bishop of Georgia in February 1841.

The Parish continues to use the 1928 Book of Common Prayer, as the basis for worship. St. John's maintains a cordial relationship with the Episcopal Diocese of Georgia, although the character of the congregation is more traditional than most of the parishes in The Episcopal Church (TEC).

All content from Kiddle encyclopedia articles (including the article images and facts) can be freely used under Attribution-ShareAlike license, unless stated otherwise. Cite this article:
St. John's Church (Savannah, Georgia) Facts for Kids. Kiddle Encyclopedia.