St. John's Cathedral located at 413 Cumberland Avenue in Knoxville, Tennessee, is the cathedral church of the Episcopal Diocese of East Tennessee.

In 1891, the original building was razed to make room for a larger facility, which was completed in 1892. The architect for the current building was J.W. Yost of Columbus, Ohio. The stone church is built in a Latin cross form, but the nave, transepts, and apse are minimal in size compared to the crossing, resulting in a large central space. The architectural style is Richardsonian Romanesque. Features include a slate roof, turrets, buttresses, and rose windows. 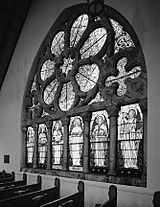 Rose window on the south wall

A devastating fire in the church building in 1919 destroyed many of the original stained glass windows, but the building was promptly restored. In 1963, extensive renovation created the undercroft under the nave floor. In 1986, St. John’s was designated as the seat of the bishop for the newly created Diocese of East Tennessee.

Members of St. John's have started a number of organizations in Knoxville, including the Episcopal Church of the Ascension (1957), Volunteer Mission Center (1978), the Episcopal School of Knoxville (1999), and have adopted Green Magnet School as a resource provider (2013).

The Great Hall was added to the facility in 1984, along with other interior renovations and the old church office building was torn down to create an enclosed courtyard. The Cathedral also acquired an adjacent office building, originally constructed for the Diocese of East Tennessee, and now use it as the church's offices and a meeting center. A major exterior and interior restoration project took place between 2018 and 2020 to correct moisture intrusion problems, repair the sanctuary interior, install state of the art lighting and sound systems, update restroom facilities, create a new library and several other upgrades. Much of the work was done in preparation for the installation of a new Goulding & Wood organ, dedicated to Jim and Natalie Haslam by Steve and Ann Haslam Bailey.

The Very Reverend John C. Ross is Dean of the Cathedral. The Reverend Canon Thom Rasnick is the Sub-Dean. 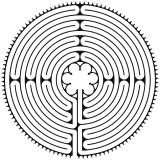 The cathedral courtyard features the Mary Clark Wright Memorial Labyrinth which was commissioned by her children. The maze is a replica of the Chartres Cathedral pattern and includes lunations, trefoils, and petals sculpted in terra cotta and light gray paving stones. The path is about 12.5 inches wide and the labyrinth is 39 feet in diameter, with a total path length of 750 feet. Work on the project was completed by Labyrinths in Stone, of Yorkville, Illinois, and the dedication ceremony was held in September 2001. The labyrinth was refurbished in 2006 and is available for community use through the church offices.

All content from Kiddle encyclopedia articles (including the article images and facts) can be freely used under Attribution-ShareAlike license, unless stated otherwise. Cite this article:
St. John's Cathedral (Knoxville, Tennessee) Facts for Kids. Kiddle Encyclopedia.