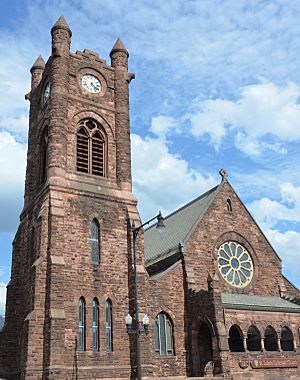 St. Luke’s Episcopal Church is a parish church in the Episcopal Diocese of Western New York. located at 410 North Main Street in Downtown Jamestown, New York. It is included on the National Register of Historic Places

St. Luke’s Church has had three structures. The first, built in 1854, was Richard Upjohn design. The Vestry paid $2,000 for the lot on the corner of Main and 4th in Jamestown, where the current church now stands. The first cornerstone of the church was laid on September 27, 1854, and it was consecrated on May 6, 1856. On the Sunday before Christmas 1862, a defective flue caused a fire in the structure, and the church burned down. The flames could not be brought under control because Jamestown did not have a village water system at that time.

The parish immediately started on reconstruction, using the foundation and the architectural plans of the previous church. The cornerstone for the second structure was laid on June 18, 1863. In January 1890, the parish received a large bequest from Mary Prendergast. Under the terms of her will, St. Luke’s received $125,000 to build a fireproof stone church in memory of her daughter, Catherine. The cornerstone of the new church was laid on November 29, 1892.

The church is a structure of rock-faced Medina sandstone, which blends Late Gothic Revival and Romanesque Revival elements. It was designed by William P. Wentworth. The structure has a traditional cruciform plan with a square bell tower attached to the northeast corner of the church. The tower features a clock on each face side and rounded corners topped with conical pinnacle. Intact interior, original lamb stained glass windows, an arcaded façade with a porch and narthex, and a stone tracery in the west facing Rose Window are also within the church. St. Luke’s is a current nominee for inclusion in the Medina Sandstone Hall of Fame.

In 2017, new stained glass commissioned from Beyer Studio were installed as part of a renovation of the Undercroft. The windows feature the four seasons of flora and fauna in Chautauqua County.