St Michael and All Angels Church is a late nineteenth-century church in the settlement of Partridge Green in the parish of West Grinstead in West Sussex. It was built to cater for the then growing population of the village. Ian Nairn, in the Sussex volume of The Buildings of England, approves of the simplicity of this "flint village church" and comments that most "other counties would have had it much fussier".

Houses were built in the village in the eighteenth century, and expansion increased after the Partridge Green railway station was opened in 1861. The settlement was served from 1884 by an iron mission room in nearby Jolesfield. The new church was built in 1890 on a site given by the Rev. John Goring, with the memorial stone laid by Lady Burrell on 30 May 1890. The church was designed in thirteenth century style by the architectural firm of W.G. Habershon and J.F. Fawkner. The church was served by curates until 1946, since when it has been served by the rector of West Grinstead. 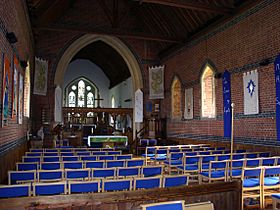 The nave of St Michael and All Angels Church

The church consists of a chancel, nave and west tower. Entry is by a south porch. The exterior is constructed of flint with stone dressings. Inside the walls are of exposed brick. The rere-arches of the lancet windows and the tower and chancel arches are of stone. The timber framed roof is described by John Allen as the best feature. The tower has a tiled pyramidal cap.

The font may have been cut from an earlier medieval original. The east window is by C.E. Kempe

All content from Kiddle encyclopedia articles (including the article images and facts) can be freely used under Attribution-ShareAlike license, unless stated otherwise. Cite this article:
St Michael and All Angels Church, Partridge Green Facts for Kids. Kiddle Encyclopedia.