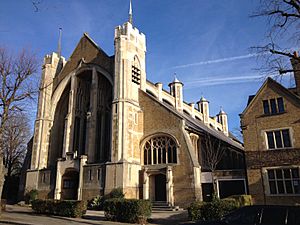 St Peter's Church, Ealing, is an Anglican parish church in Mount Park Road, North Ealing, in the Diocese of London, regarded by John Betjeman as being amongst "the noblest churches we possess." Held to be one of the premier architectural works in Ealing, the Grade II* Listed building is noted for its combination of Arts & Crafts and late-Victorian Gothic as well as its west front and great west window. In addition to Sunday and weekday services, the church and adjacent hall serve as a hub for various community activities and events.

Replacing an iron church which had stood on the site for 10 years, St Peter’s was built between 1892 and 1893 to accommodate the growing suburb of North Ealing. The original iron church had been dedicated to St Andrew and it was originally proposed to give the same name to the new church. However, when the Presbyterians started to build in Mount Park Road in 1889, the vestry felt 'that this Church should set the example of giving way in face of a threatened dispute about the Saint's name' and with commendable tact abandoned the 'Scottish' saint in favour of St Peter.

The new building was designed by John Dando Sedding, the architect of Holy Trinity, Sloane Street but, following Sedding’s death, it was built under the direction of his pupil and successor in practice, the noted designer and architect Henry Wilson. The foundation stone was laid in 1893 by Princess Helena, Queen Victoria's third daughter. The building was consecrated the same year by Frederick Temple, Bishop of London and later Archbishop of Canterbury.

Sedding’s plans for the church were complimented by The Builder magazine as “a piece of real originality in design, which is refreshing to come across after seeing so many repetitions of old forms, Classic and Gothic”. Pevsner notes the “admirable use of Gothic forms – especially the curvaceous forms of late Gothic – to produce a building of great originality”.

The church was added to extensively throughout the first quarter of the 20th century. In 1911, two doorways were created at the west end of each aisle, and in 1913 the Lady Chapel was built on the south side of the chancel. The north transept tower intended by Sedding was never built.

The most notable feature of the building, the west front, has two small turrets on either side of large the recessed west window, which is unusually large with fine composite tracery. The exterior of the building is also of note on account of the long steep nave roof with shallow chains of arches connecting small turrets.

Inside, much of the intended ornamentation was never completed. However, the building’s substantial four-bay nave with Gothic triforium, allied with the clear glass of the windows and the lack of ornamentation, make the church unusually light and spacious. Singular features include the in 1913, and the inner west doors, with decorative Art Nouveau metalwork believed to be by Henry Wilson.

Between 1921 and 1928 the Lady Chapel, originally constructed in 1913, was decorated and furnished as a War Memorial Chapel. Led by a War Memorial Committee, the scheme included the installation of an oak reredos, the decoration of the ceiling and a new screen between the Chapel and main Church. New altar rails were given in memory of Second Lieutenant Wilfred Holmes, son of Basil Holmes, a local politician and Isabella Holmes. The scheme also included the fine wall paintings of angels and the Virgin Mary over the reredos in the Lady Chapel, executed by Henry Charles Brewer in 1928.

Despite a scheme of stained glass being designed for the whole church, only the four lights in the Lady Chapel (showing scenes from the Nativity) and two windows in the north aisle were ever completed. The existing stained glass was designed by Walter Towers of Kempe and Co.

In the south aisle is a painting by Edward Arthur Fellowes Prynne, depicting Christ Before Pilate. Prynne was the brother the architect George Fellowes Prynne and lived in the Parish. The picture was given to the Church by Prynne's widow following his death in 1921.

A campaign between 2011 and 2017 to restore the west window, and the high-level stonework on the north and south sides of the church raised almost £1 million to carry out the necessary repair. This work was enabled through the assistance of English Heritage, the Heritage Lottery Fund, the National Churches Trust and others.

St Peter's holds services on Sunday mornings and throughout the week in addition to major services at Easter and Christmas. It runs a local walking group, hosts the Ealing Churches Winter Night Shelter and an organ recital series. St Peter’s also holds an Amnesty Writing Letter Group, book club and junior church, and has a Sunday choir. The church is also a venue for Ealing Autumn Festival events and is used by local schools for concerts and carol services.

Other notable former clergy
Morris Maddocks was a curate of the church in the 1950s and was later Assistant Bishop of Bath and Wells. While at St Peter's he married Anne Maddocks, Assistant Organist of Chichester Cathedral.
Michael Tavinor, the current Dean of Hereford Cathedral, was a curate at St Peter's between 1982 and 1985.

All content from Kiddle encyclopedia articles (including the article images and facts) can be freely used under Attribution-ShareAlike license, unless stated otherwise. Cite this article:
St Peter's Church, Ealing Facts for Kids. Kiddle Encyclopedia.