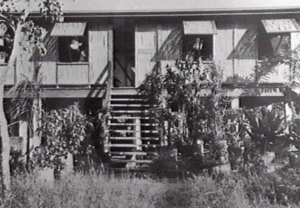 The Stella Maris site is located on McMinn Street in Darwin and consists of three main buildings.

The oldest building was constructed 1930s by the Commonwealth Railways. While the exact date of its construction is not known, a 1936 map of central Darwin shows two adjacent buildings marked as 'Commonwealth Railways'. The remaining building on site was one of these. The other is thought to have been demolished in the early 1940s. The building may be featured in a photograph dated 1936, entitled “an old railway house on the way to the wharf” although it has not been verified that it is the same building. The fact that the building was described as ‘old’ in 1936 suggests the possibility that it may have been built much earlier.

Upon the closure of the North Australia Railway in 1976, many of its buildings were sold or demolished. The site was handed to the City of Darwin Council by the Australian National Railways Commission. It was then leased to Roman Catholic Stella Maris organisation in 1979 to be operated as a licensed club.

In 1995 the council recommended that the Stella Maris Hostel be registered as a heritage site. The bid was unsuccessful. The site was re-nominated for heritage listing in 2003. It was accepted on 10 June 2004.

At the rear of the site are two other buildings constructed in the 1990s. Neither is considered historically significant.

On 4 March 2016, the Northern Territory Government announced that it had granted a ten-year lease to the National Trust of Australia (Northern Territory) for use of the site as a museum and cafe.

All content from Kiddle encyclopedia articles (including the article images and facts) can be freely used under Attribution-ShareAlike license, unless stated otherwise. Cite this article:
Stella Maris, Darwin Facts for Kids. Kiddle Encyclopedia.