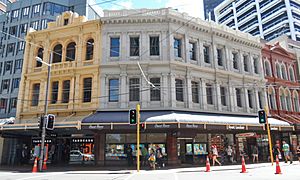 The site of the building had been known since the 1840s as Clay or Windy Point. Located on Wellington's original beach front, the site was marked as the 88th most desirable acre in Wellington by New Zealand Company selectors. In 1901, 'Dawson commissioned Wellington architect William Charles Chatfield to design a building to fit the triangular site in 1900. Chatfield designed a three-storey building with a front that mimicked the angle created by the junction between Lambton Quay and Willis Street'.

The Stewart Dawson's building was a fine example of Victorian commercial architecture. Italianate in style, it has a well proportioned façade with its pilasters heavily decorated with fine floral ornamentation.

The building was classified as a "Category II" by the New Zealand Historic Places Trust. In 2016 Stewart Dawson's jewellery company moved out. The Stewart Dawson's building and the heritage buildings on either side of it were demolished, with the historic façades retained, and a new building is being constructed behind the façades. Completion is due in April 2021.

All content from Kiddle encyclopedia articles (including the article images and facts) can be freely used under Attribution-ShareAlike license, unless stated otherwise. Cite this article:
Stewart Dawson's Building Facts for Kids. Kiddle Encyclopedia.