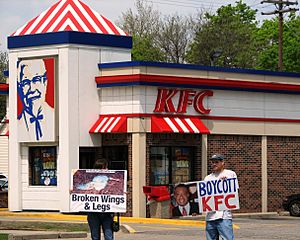 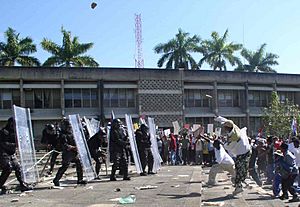 A protest
For the software, see Subversion (software).

Subversion means trying to break the established order of a society. Subversion works against structures of power, authority, exploitation, servitude, and hierarchy. A subversive is something or someone that has some possibility of turning against an organization or system.

Subversion is a crime in China. The government of the People's Republic of China prosecutes subversives under Articles 102 through 112 of the state criminal law. These laws describe behavior that can be a threat to national security. China has prosecuted many dissidents using these laws. Articles 105 and 111 are used the most often to silence political dissent. Article 105 makes it a crime to organize, make a secret plan, work against the national order, or tell rumors to make people fight the national order or overthrow the socialist system. Article 111 prohibits stealing, secretly collecting, purchasing, or illegally providing state secrets or intelligence to an organization, institution, or personnel outside the country.

There is no crime defined as "subversion" in British Constitutional law. There is a crime of treason. Legal experts have tried define subversion, but political and legal thinkers could not reach a general agreement.

All content from Kiddle encyclopedia articles (including the article images and facts) can be freely used under Attribution-ShareAlike license, unless stated otherwise. Cite this article:
Subversion Facts for Kids. Kiddle Encyclopedia.