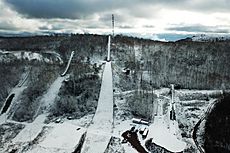 View of all jumps and training faciliities

Suicide Hill Ski Jump is a 90-meter ski jump located in Negaunee, Michigan, and is part of the Ishpeming Ski Club. It is one of three major ski jumps located in the Upper Peninsula of Michigan (the others being Copper Peak (a larger ski flying hill) and Pine Mountain Ski Jump). Suicide Hill has been in existence since 1925. Suicide Hill Ski Jump is located in a small valley known as Suicide Bowl. Suicide Bowl contains a total of five jumps: a 13-meter, 25 meter, 40 meter, 60 meter, and Suicide Hill at 90 meters. The 13 meter and 40 meter jumps are fitted with plastic for summer jumping. All five jumps are used during winter. Suicide Bowl also contains cross-country ski runs.

Before the construction of the jump in 1925, numerous other hills and jumps were used for competitions. The first competition that took place in Ishpeming, Michigan was on February 25, 1882. Since 1887, an annual competition has taken place in the area. On February 26, 1926, Suicide Hill was opened for its first competition. The name "Suicide Hill" was given by a local newspaper reporter named Ted Butler after jumper Walter "Huns" Anderson was injured in 1926. Due to this long history of ski jumping in the area, the National Ski Hall of Fame is located in Ishpeming.

All content from Kiddle encyclopedia articles (including the article images and facts) can be freely used under Attribution-ShareAlike license, unless stated otherwise. Cite this article:
Suicide Hill Ski Jump Facts for Kids. Kiddle Encyclopedia.