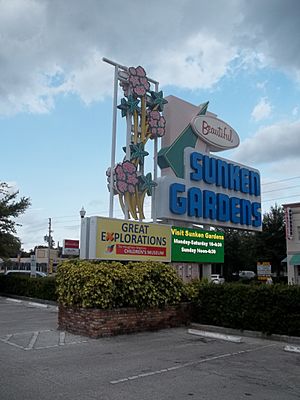 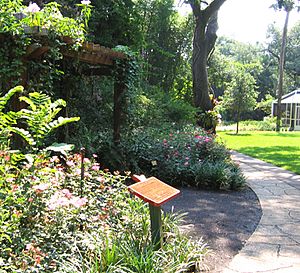 The Sunken Gardens are 4 acres (1.6 hectares) of well-established botanical gardens, located in the Historic Old Northeast neighborhood of St. Petersburg, Florida, at 1825 4th Street North. The Gardens have existed for more than a century, and are one of the oldest roadside tourist attractions in the United States. The Gardens are now operated by the City of St. Petersburg, FL and maintained with the help of volunteers. Sunken Gardens are open to the public every day of the week. An admission fee is charged for entrance into the gardens and a yearly membership is also available.

Sunken Gardens retains their historical interest as an important example of a 1930s Florida roadside commercial attraction, and is probably the oldest commercial tourist attraction on Florida's west coast. The Gardens are open to the public for educational programs, tours, and special events, particularly weddings which have taken place for decades on the Wedding Lawn, and in the banquet facilities in the Garden Room overlooking the unique garden setting. 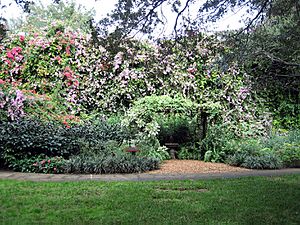 The Gardens began in 1903, when plumber and avid gardener George Turner Sr. purchased six acres of land, including a shallow lake 10 feet (3.0 m) below sea level, which he drained to form his private "sunken" garden. Turner started planting papayas and citrus fruits along with other exotic plants on the rich soil surrounding his home. By the 1920s, Turner had opened a nursery and began selling fruits, vegetables, and other plants, and visitors were paying a nickel each to stroll through the gardens. In the fall of 1935, he fenced his garden and started charging an admission fee of 25 cents. The Gardens eventually became widely popular, and from the 1950s through the 1970s were ranked among Florida's top ten commercial attractions. After George's death in 1961, his sons, Ralph and George Jr. continued to run the gardens, which were eventually passed on to Ralph's three sons. They eventually sold it to the city in 1999 for more than $2.26 million.

The Gardens include a large building originally known as the Sanitary Public Market, first constructed in 1926-27, and designed by architect Albert Lee Hawes. It was a Mediterranean Revival style arcade with twin Moorish towers, cast stone trim, and a tile roof. In 1940, it was converted for use as the Coca-Cola Bottling Company, and restyled in Art Moderne. The Turner family purchased the building in 1967 to create the World's Largest Gift Shop and the King of Kings Wax Museum, adding faux lava portions at that time. In 1999, it was purchased by the City of St. Petersburg, along with the adjoining gardens, using a voter-approved tax. The Gardens were designated as a local historic landmark and treated to several years' efforts of restoration. On June 27, 2002, the former Sanitary Public Market building was added to the U.S. National Register of Historic Places, and is now the home of a children's science museum called Great Explorations.

The Gardens currently contain over 500 species of tropical and subtropical plants amidst pools and cascading waterfalls, lushly planted in a collection of more than 50,000 tropical plants and flowers. They include a Japanese garden, cactus garden, and butterfly garden, and Chilean flamingos. Plants include bougainvilleas, royal palms, water lilies, shrimp plants, and fruit trees. The garden atmosphere is peaceful and many of the plants are quite large (compared to typical specimens) due to their long history of protection and cultivation.

In 2016, Sunken Gardens acquired a new young flock of 20 Flamingos from the San Antonio Zoo. They joined elderly flamingo residents, George and Lucy, the two remaining Chilean flamingos from the original 17 bird flock that have been on exhibit since 1956. The new flamingos were purchased with funds raised by a nonprofit group, Flamingos Forever, composed of volunteers. Additionally, the city purchased a $30,000 nighttime enclosure for the new flock. Flamingos Forever changed their name to Sunken Gardens Forever, after the acquisition of the new flock, and St. Petersburg Mayor Rick Kriseman named May "Sunken Gardens Forever Appreciation Month" in St. Petersburg, FL, in honor of their fundraising efforts. 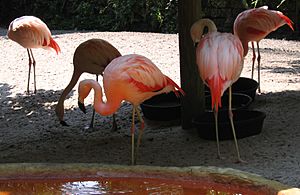 Sunken Gardens offers horticulture and other education programs for children and adults. Examples include "Cameras and Kids" where children learn nature photography skills with their own camera or smartphone, "Propagation Techniques," "Growing Microgreens," "Rain Gardens and Barrels," and "Think Outside the Pot: Mounting Orchids". Programs are often free with membership and are included with paid admission, though some include a fee in addition to standard admission.

All content from Kiddle encyclopedia articles (including the article images and facts) can be freely used under Attribution-ShareAlike license, unless stated otherwise. Cite this article:
Sunken Gardens (Florida) Facts for Kids. Kiddle Encyclopedia.