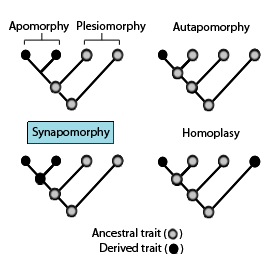 A cladogram showing the terminology used to describe different patterns of ancestral and derived character states.

A synapomorphy is a common character. It is a term in cladistics, meaning a trait which is present in two or more species by common descent. It is a type of homologous character or homology.

More precisely, it is shared by two or more taxa and their most recent common ancestor, whose own ancestor in turn does not possess the trait. Thus, it is not just an ancestral trait, but a recently evolved distinguishing trait. It helps to distinguish between two trees of descent which would otherwise be equally likely.

All content from Kiddle encyclopedia articles (including the article images and facts) can be freely used under Attribution-ShareAlike license, unless stated otherwise. Cite this article:
Synapomorphy Facts for Kids. Kiddle Encyclopedia.