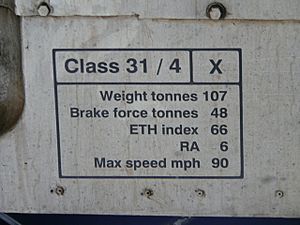 Brush Type 2 locomotives became Class 31 under TOPS. This is the data panel from a Class 31/4; the 31/4 subclass being used for locomotives with Electric Train Heating.

Total Operations Processing System, or TOPS, is a computer system for managing the locomotives and rolling stock (railroad cars) owned by a rail system. It was originally developed by the Southern Pacific Railroad and was widely sold; it is best known in the United Kingdom for its use by British Rail.

All content from Kiddle encyclopedia articles (including the article images and facts) can be freely used under Attribution-ShareAlike license, unless stated otherwise. Cite this article:
TOPS Facts for Kids. Kiddle Encyclopedia.