Versions 1 to 4 of Tamagotchi Connection have 6 levels of friendship that can be viewed in the Friends List:

Versions 5 and 6 have different levels. 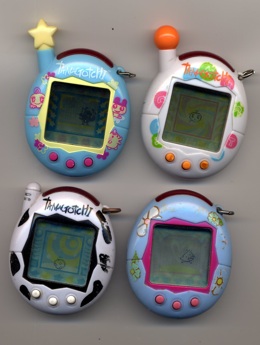 If the Tamagotchi cannot find a partner from another device to have babies with, a matchmaker will come, allowing the Tamagotchi to have a baby with a computer-controlled Tamagotchi character. This applies to versions 1 to 4 and 6 only. Version 5 introduces a Dating Show game in which the user must play to gain a CPU partner.

All Tamagotchi Devices are capable of connecting with each other; however, a character from a newer Version will show on an older version as the mystery character known as Nazotchi.

The Tamagotchi Connection v2 introduces "Gotchi Points", an in-game currency used to buy shop items. Also, more games are unlocked as the Tamagotchi ages. It has 6 stages of life:

Aside from different games, The Tamagotchi Connection v3 makes few changes in comparison to the v2 Like the v2, the older the Tamagotchi gets, the more games it has access to, and there are still 6 stages of life.

Other differences from the v2

As in previous versions, Tamagotchis play games for a certain amount of "Gotchi Points" and unlock more games as it ages.

The Tamagotchi Connection makes additional changes to gameplay instead of simply changing the games and other minor details. For example, the child and teenager can go to school and play mini-games, where an adult can get a job. Also, the "Lamp" menu item (allows the user to turn the "light" on or off) is no longer present. Instead, it is replaced with a "Mail" menu item where the player can check for any mail they will occasionally receive.

New to the Tamagotchi Connection with the v4 is the ability for a child or teenager Tamagotchi to go to school and an adult to go to work. The player can choose which teacher they want once the Tamagotchi reaches the Teenage stage, and will train either "Funny Points", "Gorgeous Points" and "Spiritual Points" through mini-games. The player also chooses what job an adult Tamagotchi gets and will unlock mini-games based on this choice.

The Connection v4.5 makes minimal changes to gameplay from the v4, short of adding new games; however, the Tamagotchi is now able to collect "Life Points".

The Tamagotchi Connection v5 is the English version of the FamiTama and is the first Tamagotchi to be exactly the same (besides language) worldwide since the Tamagotchi Plus. It was released in Asia on January 6, 2008 in Australia on January 10, 2008 and was released worldwide later in February 2008. The v5 introduces the ability to raise families, with 3-5 parents and kids. It also has a new website that it shares with the Famitama, the "Tama and Earth Expo". According to the package, "The Tamagotchis set up this expo to learn more about Earth." It contains a central pavilion and 4 other pavilions representing each of the main areas of the Earth. It also included a TV option where the player can use Gotchi Points to shop on the Shopping Channel, find a mate with the Dating Show, or go travelling on the Travelling Show which replaces the pause function of previous generations. There is a design flaw with the v5 which prevents it from properly connecting to the other Tamagotchis in the series.

When raising a family without parents, only the TV Surfing and Tea Time games are available. Having parents unlocks the Golf Putt and Shoe Pairs games. The Tamagotchi Connection v5 also has a v5.5 variant, which brings minimal changes to the generation.

The Tamagotchi can play all three music games, Sing A Song, Music Notes and Sound Block from birth. The Tamagotchi has a band from the teenager stage, whose members cannot be named, but the band itself can.

The Adoptive Connection Glitter Pad has 6 levels of friendship which is depends on the level, they will fall in love or not. Below is the list of Friendship Levels.

All content from Kiddle encyclopedia articles (including the article images and facts) can be freely used under Attribution-ShareAlike license, unless stated otherwise. Cite this article:
Tamagotchi Connection Facts for Kids. Kiddle Encyclopedia.