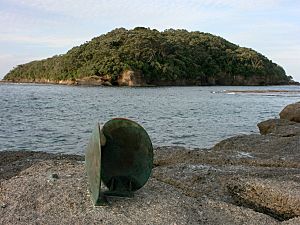 Goat Island, as seen from the beach

The island is spiritually significant to the local Māori tribe, Ngāti Manuhiri, because their ancestral waka (canoe), Moe Karaka, is said to have landed nearby.

As well as being in a marine reserve, Goat Island is a scenic reserve. The University of Auckland has a research facility at Goat Island known as the Leigh Marine Laboratory headed by Professor John Montgomery. This will form the base for the University's new South Pacific Centre for Marine Science (SPCMS). Prime Minister Helen Clark launched the national and international campaign to raise funds for the SPCMS at Leigh on 21 June 2008.

Takangaroa is another island in the same area which used to be known as Goat Island.

Goat Island and its surrounding area provide the habitat for the endemic beetle species Hyphalus wisei.

All content from Kiddle encyclopedia articles (including the article images and facts) can be freely used under Attribution-ShareAlike license, unless stated otherwise. Cite this article:
Te Hāwere-a-Maki / Goat Island Facts for Kids. Kiddle Encyclopedia.