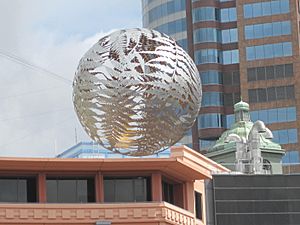 The square is surrounded by council buildings, each with a distinctive architectural style: Wellington Town Hall and council offices, the Michael Fowler Centre, the Central Library, the City-to-Sea bridge, and the City Gallery. The main tiled area is the roof of the underground library car park.

The square is paved with yellow terracotta bricks and has an iconic Neil Dawson sculpture, a 3.4 metre diameter sphere using sculpted leaves of several ferns endemic to New Zealand, suspended 14 metres over its centre. The wide City-to-Sea pedestrian bridge acts as a gateway from Civic Square to Wellington's waterfront.

The square is used for public events and is a popular place for office workers to eat their lunch on warm summer days. 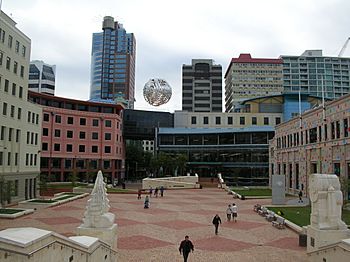 The first real plans for the Civic Square date back to 1944.

In 1987, the Wellington City Council appointed Fletcher Development and Construction Ltd as the project developers. The project involved building a new library, conversion of the existing library into the City Gallery, extension and refurbishment of City Council buildings, earthquake strengthening and refurbishment of the Town Hall, car parking space, design of the new public space and a link to the waterfront. The project was completed in 1992.

All content from Kiddle encyclopedia articles (including the article images and facts) can be freely used under Attribution-ShareAlike license, unless stated otherwise. Cite this article:
Te Ngākau Civic Square Facts for Kids. Kiddle Encyclopedia.