The City Gallery Wellington (Māori: Te Whare Toi) is an art gallery in Wellington, New Zealand. The gallery was first opened in 1980 in a different building.

Located in Civic Square, the Gallery is recognised as pivotal to Wellington’s positioning and growth as New Zealand’s arts capital. City Gallery Wellington plays a unique role in the New Zealand's cultural landscape. The gallery mounts a changing programme of exhibitions and does not have a collection. City Gallery Wellington re-opened in September 2009 after a year's closure for renovations. Three new gallery spaces were added, including one devoted to the exhibition of Maori and Pacific art, plus a new auditorium. The additions were designed by Wellington architect Stuart Gardyne of Architecture+. The Gallery reopened with the exhibition Yayoi Kusama: Mirrored Years which achieved almost record attendance. In 2018, the gallery’s entrance was remodeled to improve access. 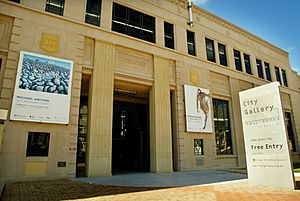 The main entrance to the Gallery

Significant group exhibitions have included Parihaka: The Art of Passive Resistance, The Exhibition of the Century: Modern Masters from the Stedelijk Museum, Amsterdam, Techno Maori―Maori Art in the Digital Age, and the Prospect:New Art New Zealand triennial series. An integral part of the programme are artists' projects where a new body of work is profiled, including Michael Harrison, Gavin Hipkins, Saskia Leek, Peter Madden, Séraphine Pick, and Yuk King Tan. The Michael Hirschfeld Gallery shows work by Wellington-based artists, designers and architects. The Gallery also regularly publishes catalogues to accompany its exhibition programme and runs an ambitious public programme of events, lectures and conversations. The education programmes focus on delivery to primary and secondary schools in the Wellington region and nationally.

City Gallery Wellington is managed by the Wellington Museums Trust with major funding from the Wellington City Council. The façade of the building features ‘Fault’, an artwork by Bill Culbert and Ralph Hotere, which was launched in 1994.

The roof has a hand sculpture called Quasi by artist Ronnie van Hout, installed in 2019. It previously stood at Christchurch Art Gallery.

In 1993 the Gallery moved to its present location on the north-eastern side of Civic Square, into the old Wellington Public Library building, after the latter was refurbished. Built in 1940 in an Art Deco style, the gallery's current building originally housed the Wellington Public Library - replacing the original red brick City Library building of 1893. In 1991 the Library moved into a new building next door.

All content from Kiddle encyclopedia articles (including the article images and facts) can be freely used under Attribution-ShareAlike license, unless stated otherwise. Cite this article:
City Gallery Wellington Facts for Kids. Kiddle Encyclopedia.