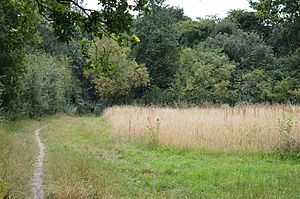 Telegraph Hill is a nature reserve near Lilley in north Hertfordshire. Between 1796 and 1814 it was a telegraph station, one of the links in the chain between Great Yarmouth and London during the Napoleanic wars. It is in the Chilterns Area of Outstanding Natural Beauty (AONB), and close to Deacon Hill SSSI (Site of Special Scientific Interest). According to the Chilterns AONB the hill is owned by the Herts and Middlesex Wildlife Trust; a notice on the site says that it is managed by the trust, but it is not listed on the trust's web site as one of its reserves.

The site is a mixture of chalk grassland and scrub, with ancient beech trees. Wild flowers include rock rose, salad burnet and common spotted orchid.

Day three of the Icknield Way Path between Streatley and Ickleford goes through the site.

All content from Kiddle encyclopedia articles (including the article images and facts) can be freely used under Attribution-ShareAlike license, unless stated otherwise. Cite this article:
Telegraph Hill, Hertfordshire Facts for Kids. Kiddle Encyclopedia.