The first time the buttes were mentioned in writing was on September 12, 1865, in the diary of Major Lyman G. Bennett, the chief engineering officer accompanying Colonel Nelson D. Cole's column of the Powder River Expedition. Bennett wrote:

Marched on west side of Powder River, crossing in the morning. The road was generally good, being on second bottom with high rocky mountains on either side the valley, the tops of many being covered with pine. The scenery was truly romantic. The mountains being high and worn into many fantastic shapes, such as ruins, castles, etc.

The buttes appear on maps from the 1880s and were likely named after a homesteading family whose last name was Terret or Terrett. From around 1915 until the 1940s a rural country schoolhouse called the Terret Butte School was situated along the east side of the Powder River below the buttes. During the mid-20th century, the buttes were located on the Swope Family Ranch. Between the early 1980s and 2005, the buttes were owned by Andrew L. Lewis Jr., the 7th United States Secretary of Transportation. Today they are a part of the Held Family Ranch. 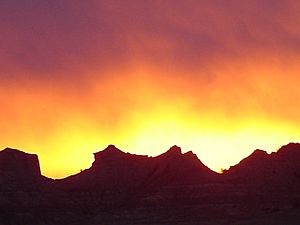 All content from Kiddle encyclopedia articles (including the article images and facts) can be freely used under Attribution-ShareAlike license, unless stated otherwise. Cite this article:
Terrett Butte Facts for Kids. Kiddle Encyclopedia.