The Blue Note is a music venue in Columbia, Missouri, and is a contributing property to the North Ninth Street Historic District. It was established in 1980 by Richard King and Phil Costello. It is famous for the legal case Bensusan Restaurant Corp. v. King over naming use on the internet.

The original Blue Note was located at 912 Business Loop 70 East and moved to its Ninth Street location (a restored vaudeville theater) in the early 1990s. In October 2014, the venue was sold to Matt Gerding and Scott Leslie.

Formerly Mojo's, Rose Music Hall is located down the street in the North Village Arts District and often referred to as "The Blue Note's little sister". The venue was also founded by King and is now owned by Gerding and Leslie, and is usually reserved for smaller-name bands, but has also booked several up and coming artists prior to their breaking out. 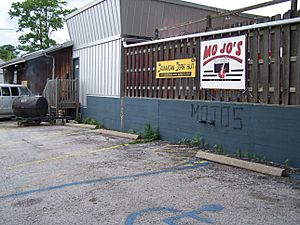 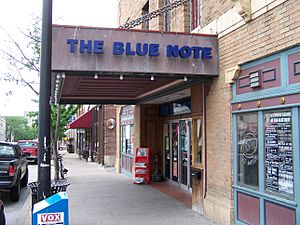 All content from Kiddle encyclopedia articles (including the article images and facts) can be freely used under Attribution-ShareAlike license, unless stated otherwise. Cite this article:
The Blue Note (Columbia, Missouri) Facts for Kids. Kiddle Encyclopedia.