The Enchanted Princess facts for kids

'The Enchanted Princess' (German: Die verzauberte Prinzessin) is a German fairy tale collected by Ludwig Bechstein, first published in his book Deutsches Märchenbuch in 1845. It belongs to the ATU tale type 554, The Grateful Animals.

A poor leather craftsman has two sons. The father favours his eldest son called Hellmerich who's arrogant and selfish, but that he sees him as brave and courageous, while his youngest called Hans, who's good and kind hearted, is seen by his father as stupid. 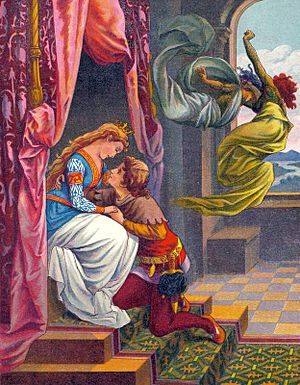 One day after making no sales, he stops at an inn and overhears a conversation going on between two men saying that the Princess has been kidnapped and placed under a spell in the castle by an evil sorcerer. Whichever man accepts the challenge must complete three hard tasks, but if he succeeds he will be given the Princess' hand in marriage and win the sorcerer's treasures. The craftsman immediately returns and asks Hellmerich to attempt this challenge. His eldest son agrees and his father uses his last savings to buy him a horse, and a sword. After saying goodbye to his family, he rides away into the distance. He goes through a forest that surrounds the sorcerer's castle. As he rides through he destroys, a beehive leaving the bees homeless, tramples an anthill, and kills some ducks near a pond.

He eventually reaches the castle and bangs on the door impatiently. An old woman comes out and tells him to come back to the castle at nine o'clock. Angrily, Hellemerich spends the night in the forest. The next morning, he returns to the castle and the old woman appears with a basket full of seeds. She scatters them all over the grass and tells Henry that as his first task he has one hour to pick all the seeds up and place them back in the basket. She leaves him and Hellmerich laughs out loud at what he sees as a pointless task and goes off for a walk instead. When he comes back the woman is very angry that he did not even attempt the task. Next she takes twelve golden keys and throws them into a pond giving Hellmerich his second task. He has one hour to get all of them back. Once again she leaves him and again Hellmerich doesn't attempt the task and goes for a walk instead. He comes back in an hour and the woman is angry with him once more.

She gives him one last chance to complete the challenge. She takes Hellmerich into the castle and after going up a big winding staircase to a room with three veiled figures. She warns him to think carefully before he makes his decision and before she leaves giving him one hour to decide. Hellmerich hastily chooses the figure on the right that is revealed to be a huge fire breathing dragon, while the left was another and the middle was the Princess. The Sorcerer orders the dragon to take Henry in its teeth and throw him out of the window, killing him for his failure.

Sometime later, the father have been waiting patiently for any news of his son. After a while Hans decides to take up the challenge. His father is unconvinced, but his son wants to prove himself. Hans leaves without any transportation or protection for his father had sold all he had for his elder brother. He takes the same path through the forest, thanking the birds for their beautiful singing, helping rebuild the anthill, picking a lovely bunch of pollen flowers for the bees to help with their hive, and sharing his breakfast with some ducks. He arrives at the castle and politely asks the woman if he can attempt the challenge. The woman asks him to come back at nine and when he does next morning she gives him the task with the seeds. John attempts but doesn't seem to be going very far and after a quarter of an hour nearly gives up. Suddenly a long line of ants appear and pick up every single seed, placing them back in the basket. Hans is very grateful and thanks them. The old woman returns and is very pleased at Hans' progress. She again drops the twelve keys into the pond, giving Hans one hour to retrieve them all. Hans is worried for he is not a strong swimmer. He attempts, but it seems hopeless. When all seems hopeless, the ducks he met in the forest retrieve each one of the keys for him, Hans is once again very grateful and thanks them.

The old woman returns and is very impressed. She takes Hans to the room with the three veiled figures. The Sorcerer himself is there too. John is warned by her of the consequences if he chooses the wrong one and leaves him, giving him one hour to decide. The young man is still pondering over his decision when a swarm of bees fly through the window and buzz around the figure in the middle. After the old woman comes back John tells her and the Sorcerer that the middle one is the Princess. The veils fall revealing that Hans had made the right choice. John gratefully thanks the bees for their help. With the spell broken, the Sorcerer and the two dragons are dead and the beautiful Princess takes John back to her palace to be her husband. Hans' father is invited to the wedding and even though they have lost Henry. He is very pleased for his son and gives him his blessing, ashamed for thinking so little of him.

All content from Kiddle encyclopedia articles (including the article images and facts) can be freely used under Attribution-ShareAlike license, unless stated otherwise. Cite this article:
The Enchanted Princess Facts for Kids. Kiddle Encyclopedia.