The Entertainment Quarter facts for kids 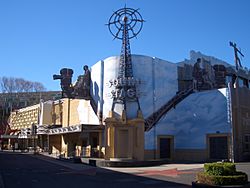 The precinct features many specialty shops, bars, cafes, restaurants, two cinemas (both owned by Hoyts), live entertainment venues including a comedy store and function centre, children's playground, parklands and entertainment sporting facilities such as ten pin bowling and an ice rink during winter.

The Showring hosts a Farmer's Market on Wednesdays and Saturdays and a Merchandise Market on Saturdays and Sundays. Retailers include music retailer Sanity, and fashion stores Esprit and Bay Swiss.

The precinct is also home to The Jerzy Toeplitz Library which is dedicated to film, television and radio studies. The library is located inside the AFTRS campus.

The Entertainment Quarter is home to the Australian Film Television & Radio School (AFTRS). The higher education provider is the nation’s premier screen and broadcast school. It is the only Australian school consistently rated in the top 15 international film schools by industry publication, The Hollywood Reporter.

AFTRS relocated from its original location in North Ryde to a purpose built building in 2008, located adjacent to Fox Studios Australia and around the corner from the Hoyts Cinema.

The Entertainment Quarter and Fox Studios Australia were originally the site of Royal Agricultural Society of New South Wales Sydney Showground, which hosted the annual Sydney Royal Easter Show. The Sydney Showground moved to Homebush Bay in preparation for the 2000 Summer Olympics. Some of the venues built for the Olympic Games are now used for the annual show.

Fox Studios Australia and the entertainment precinct opened at Moore Park in 1998. A theme park at this location was closed, and some of the facilities have found new uses in the Entertainment Quarter.

All content from Kiddle encyclopedia articles (including the article images and facts) can be freely used under Attribution-ShareAlike license, unless stated otherwise. Cite this article:
The Entertainment Quarter Facts for Kids. Kiddle Encyclopedia.