The Forest Rangers facts for kids

The Forest Rangers was a Canadian television series that ran from 1963 to 1965. It was a co-production between CBC Television and ITC Entertainment and was Canada's first television show produced in colour. Executive producer Maxine Samuels founded the show.

The series ran for three seasons, a total of 104 30-minute colour episodes (although Canadian and UK audiences would not get to see them in colour until long after the series ended). Early episodes of the series were broadcast in serialized form as part of a CBC children's series entitled Razzle Dazzle, hosted by Alan Hamel and Michelle Finney.

This was the first appearance in a major series by Gordon Pinsent. He left the series in 1965 to star in Quentin Durgens, M.P.. In 1966 the series was adapted into a comic strip by British comics artist John Gillatt, which appeared in the British comic magazine Tiger.

The show's first season was released on DVD by Imavision in early 2007. 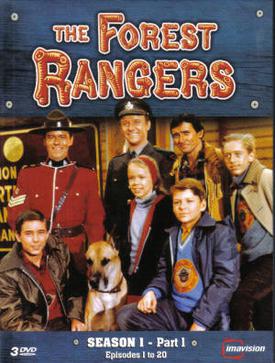 All content from Kiddle encyclopedia articles (including the article images and facts) can be freely used under Attribution-ShareAlike license, unless stated otherwise. Cite this article:
The Forest Rangers Facts for Kids. Kiddle Encyclopedia.