The Ghosts of Heaven facts for kids 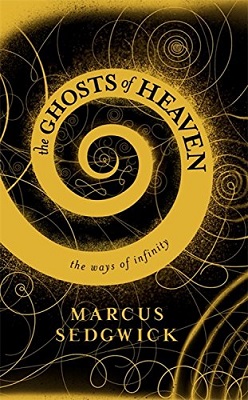 The Ghosts of Heaven is a novel by Marcus Sedgwick, published on October 2, 2014. The book is divided into four brief quarters, with each part telling a different story. The book circles around the idea "Spirals are everywhere". The story begins in the past and ends in the future, essentially the development of mankind. The novel was shortlisted for the 2015 Carnegie Medal and received a Michael L. Printz Honor Award in 2016.

The first story is written in short lines, in a writing style similar to poetry (though it does not rhyme). It is written from the perspective of a cave girl. The second quartet describes the life of a girl living in a small village in medieval Europe, who is later accused of witchcraft. The third quarter is about a man who has lost his wife and is conducting research on a mental asylum, and the final story is from the perspective of a man in the far future who is controlling a ship holding 500 people in deep sleep. They are headed for a distant planet and on this journey, the man discovers that he has been victim to misinformation on the government's behalf. It ends with the man landing on a planet he stumbles across during the ship's journey, and it is implied this planet is that on which the first quartet took place. each of the stories is differently written

An author's note at the beginning of the book tells the reader that the four stories may be read in any of the four different orders, with each making a slightly different type of sense.

All content from Kiddle encyclopedia articles (including the article images and facts) can be freely used under Attribution-ShareAlike license, unless stated otherwise. Cite this article:
The Ghosts of Heaven Facts for Kids. Kiddle Encyclopedia.