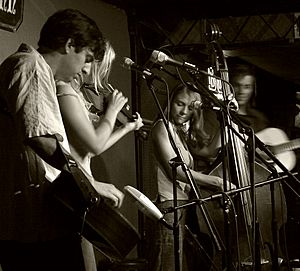 The Gulch is a neighborhood on the south-west fringe of downtown Nashville, Tennessee, near Interstate 40, Interstate 65, and Interstate 24. It is known to be a trendy and hip neighborhood, and a popular destination for locals, college students, and visitors.

A Gulch Business Improvement District (GBID) was created in 2006 and is managed by the Nashville Downtown Partnership. The area is currently undergoing an urban revitalization, with new residents, office space, and retail shops moving into newly built or recently renovated buildings.

On February 17, 2009, it was announced the Gulch neighborhood had been certified as a LEED Green Neighborhood. It was the first neighborhood in the American South to become so certified, and one of only a few in the United States to do so by that date. The announcement was made by Mayor Karl Dean and developer MarketStreet Enterprises.

In 2016, construction of a pedestrian bridge was announced to connect the Gulch to the South Broadway (s0Bro) neighborhood.

The Gulch is home to one of Nashville's most famous and historic music venues, The Station Inn. Also near the Gulch is The Mercy Lounge, and the historic Union Station Hotel

The Gulch neighborhood is bound:

Restaurants and food establishments in the Gulch:

Music Venues in the Gulch include:

Residential buildings in the Gulch include:

All content from Kiddle encyclopedia articles (including the article images and facts) can be freely used under Attribution-ShareAlike license, unless stated otherwise. Cite this article:
The Gulch, Nashville, Tennessee Facts for Kids. Kiddle Encyclopedia.