The Kippax facts for kids 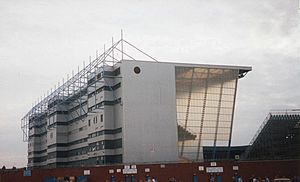 New The Kippax building in 1997, home of Manchester City FC

The Kippax was one of the most well known stands at Manchester City's Maine Road Ground. Originally the Popular Stand, its name was changed in 1957. The Kippax was unusual in that unlike in most other grounds, this area of support occupied a full side rather than an end of the ground. In 1994, due to the Taylor Report, the new redeveloped, all seater stand was opened by City legend Bert Trautmann. It housed 10,000 fans and had three levels. At the time it was the highest stand in the country.

The club left the Maine Road ground in 2003 and moved to the new City of Manchester Stadium.. This of course bought the end for one of City's most loved stands, The Kippax. Unofficially, the East stand in the new stadium is also named Kippax.

All content from Kiddle encyclopedia articles (including the article images and facts) can be freely used under Attribution-ShareAlike license, unless stated otherwise. Cite this article:
The Kippax Facts for Kids. Kiddle Encyclopedia.