The Mansion of Happiness facts for kids 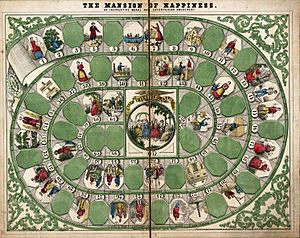 The sixty-six space spiral track of The Mansion of Happiness (1843) depicts virtues and vices.

The Mansion of Happiness is a 19th-century board game for children. It was designed by clergyman's daughter and children's author Anne Abbott. The game was published by W. & S. B. Ives in 1843. Parker Brothers republished the game in 1894. The firm claimed the game was the first board game published in America, but this claim is disputed. It was however the first mass-produced board game in America.

The game is didactic—it is both entertaining and instructive. The theme of the game is Christian virtue. Players race about a track of 66 spaces. "The Mansion of Happiness" (Heaven, the center space) is their goal. Landing on a space marked with a vice (such as dishonesty) will send the player back several spaces and away from the goal. Spaces marked with virtues (such as honesty) send players forward and closer to the goal. The winner is the player who reaches the center space first.

Like many Christian-themed games of the middle 19th-century, The Mansion of Happiness lost some of its popularity in the last decades of the 19th century. It was then that games with secular and materialistic themes such as Milton Bradley's The Checkered Game of Life rose in demand. In literature, The Mansion of Happiness is mentioned in the boys' book Shifting for Himself; or, Gilbert Greyson's Fortunes (1876) by Horatio Alger, Jr. In this story, the title hero plays the game with friends Laura and Fred Vivian to while away the evening hours. In 2012 the game board was available on-line in a color reprint of the original.

All content from Kiddle encyclopedia articles (including the article images and facts) can be freely used under Attribution-ShareAlike license, unless stated otherwise. Cite this article:
The Mansion of Happiness Facts for Kids. Kiddle Encyclopedia.