The Parish Church of St. Lawrence facts for kids 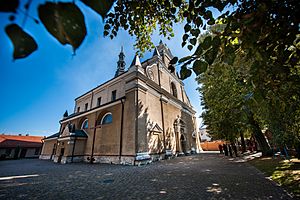 The Parish Church of St. Lawrence in Radymno - a historic church which is situated in the Przemyśl archidiocese.

The church was built in the years 1724-1730 in the baroque style. The bishop Aleksander Antoni Fredro was the prime mover of this facture.By the church there is a belfry from the year 1729, an antique manse and a nuns' home. During the First World War St. Lawrence's church was vastly damaged nevertheless shortly after the war it was renovated After the Second World War the aim was to embellish the temple which is why, the front of the church and the belfry renovations. The temple's historic door was rebuild as well.

The interior has got 7 altars. Some of the altars are: St. Anna's altar, Jezus's Sacred Heart altar, St. Agnes's altar and St. Nicholas's altar. Inside the church there is a solid pulpit which has got a rich wood carving decoration. There is also the fontal source with figures of Jesus and John the Baptist. It comes from the first half of the XVIII century.

All content from Kiddle encyclopedia articles (including the article images and facts) can be freely used under Attribution-ShareAlike license, unless stated otherwise. Cite this article:
The Parish Church of St. Lawrence Facts for Kids. Kiddle Encyclopedia.