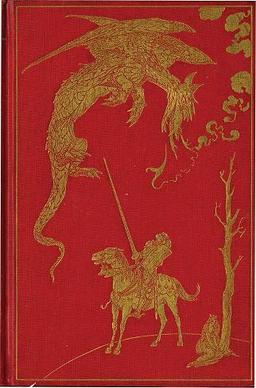 The Red Romance Book: Tales of Knights, Dragons & High Adventure (or The Red Book of Romance) is a book of heroic tales and legends. It was edited by Andrew Lang with illustrations by Henry J. Ford, and published in London by Longmans, Green, and Co. in 1905. The tales were generally taken from sagas and chivalric romances such as The Story of Burnt Njal, The Faerie Queene, Don Quixote and Orlando Furioso. They are about such legendary characters as Bevis of Hampton, Huon of Bordeaux, Ogier the Dane and Guy of Warwick. Some are literary fantasies, while others, such as the story of El Cid, have a basis in historical fact.

The 1905 edition of the book included:

All content from Kiddle encyclopedia articles (including the article images and facts) can be freely used under Attribution-ShareAlike license, unless stated otherwise. Cite this article:
The Red Romance Book Facts for Kids. Kiddle Encyclopedia.