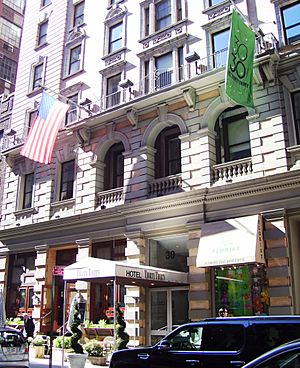 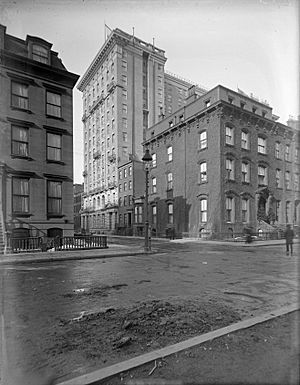 The Redbury New York, formerly known as the Martha Washington Hotel is a historic hotel at 29 East 29th Street, between Madison Avenue and Park Avenue South in the NoMad neighborhood of Manhattan, New York City. It was built from 1901 to 1903, and was designed by Robert W. Gibson in the Renaissance Revival style for the Women's Hotel Company. It was originally a women's only hotel.

The hotel was designed by noted architect Robert W. Gibson, and opened on March 2, 1903, as the first hotel in the city exclusively for women, serving both transient guests and permanent residents. It was almost immediately fully occupied, with over 200 names on a waiting list. It originally had 416 rooms. On June 19, 2012 it was designated a historical landmark by the New York City Landmarks Preservation Commission. The original name of the hotel was the "Women's Hotel", and subsequent names (after "Martha Washington Hoytel") include "Hotel Thirty Thirty" (2003), "Hotel Lola" (2011) and "King & Grove New York" (2012).

On May 21, 2014, King & Grove Hotels announced it was re-branding all of their hotels under the name "Chelsea Hotels", and that King & Grove New York would be re-launched as the "Martha Washington Hotel" in August 2014. As part of the project the lobby level of the hotel was completely redesigned in a modern fashion, and includes a new restaurant, "Marta", run by Danny Meyer's Union Square Hospitality Group. The restored hotel has over 6,000 square feet of function space.

All content from Kiddle encyclopedia articles (including the article images and facts) can be freely used under Attribution-ShareAlike license, unless stated otherwise. Cite this article:
The Redbury New York Facts for Kids. Kiddle Encyclopedia.