The Shangri-Las facts for kids 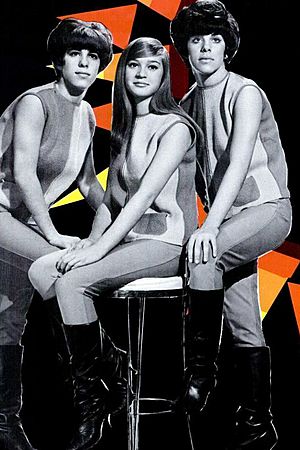 The Shangri-Las 1964, without Betty Weiss

The Shangri-Las were an American pop girl group of the 1960s. They released their first album Leader of the Pack in 1965. Their 1964 single "Leader of the Pack" was number one in the United States.

The members of the group were sisters Betty and Mary Weiss, with twins, Margie and Mary-Ann Ganser.

Their first hit recording was "Remember (Walking In The Sand)" (1964) which reached number 5 in the US and number 14 in the UK.

All content from Kiddle encyclopedia articles (including the article images and facts) can be freely used under Attribution-ShareAlike license, unless stated otherwise. Cite this article:
The Shangri-Las Facts for Kids. Kiddle Encyclopedia.