The Silverpeaks facts for kids 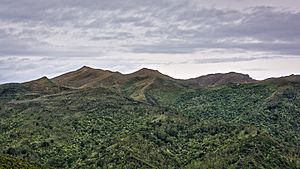 The Silverpeaks (sometimes spelt Silver Peaks) is an area of rough forest and tussock and scrub covered hill country inland and to the northwest of Dunedin, New Zealand. The area is largely uninhabited; the main indication of human activity is the Taieri Gorge Railway, which preserves the route of the former Otago Central Railway that runs along the steep-sided valley of the Taieri River. Much of the area lies within the Silverpeaks Scenic Reserve.

A network of walking tracks crisscross the area. From Pulpit Rock, trampers descend the Devil's Staircase into a lush valley just a short distance from Jubilee Hut. Access to these tracks is mainly via Double Hill Road, a rural road that leaves SH1 close to Waitati, and from several rural roads that leave SH87 between Outram and Middlemarch.

Antimony was once mined near Hindon, the largest settlement in the area.

All content from Kiddle encyclopedia articles (including the article images and facts) can be freely used under Attribution-ShareAlike license, unless stated otherwise. Cite this article:
The Silverpeaks Facts for Kids. Kiddle Encyclopedia.