Books by Astrid Lindgren featuring the Six Bullerby Children (In the US released as The Children of Noisy Village):

It was originally published in 1947 in Sweden. It has since been translated into 39 languages and published in many countries including the United States and the United Kingdom. 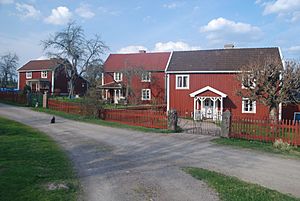 These books are about six children living in a tiny, remote village in Sweden and are set in the late 1930s, a relatively calm time in Sweden, although a war "starting soon" is sometimes briefly mentioned in newspapers the children are reading. The agricultural world is still in a pre-industrial state (no tractors or harvesters) but there are cars in the village and shops are available.

The narrator is a young girl named Lisa; she tells us about her life and adventures in the small and neat Swedish village Bullerby (Bullerbyn in Swedish). The village consists of three lined up houses in which live seven children with their parents and housekeepers: Lisa with her older brothers Lasse and Bosse, the siblings Britta and Anna, as well as Olle with his younger sister Kerstin.

Bullerbyn is identical with a small village called Sevedstorp where Lindgren's father grew up (10 miles from her hometown Vimmerby and the village Näs—the birthplace of Astrid Lindgren). Even today the three houses which appear in the story remain in Sevedstorp, where Astrid Lindgren's grandparents lived.

All content from Kiddle encyclopedia articles (including the article images and facts) can be freely used under Attribution-ShareAlike license, unless stated otherwise. Cite this article:
The Six Bullerby Children Facts for Kids. Kiddle Encyclopedia.