The Strange Library facts for kids 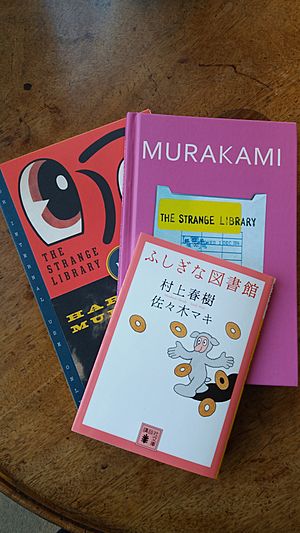 The Strange Library (ふしぎな図書館 fushigi na toshokan) is a novella for children by Japanese author Haruki Murakami (村上春樹 Murakami Haruki). A version first appeared in 1983. There are several picture books based on this short story, the most recent versions of which were published in 2014.

A boy visits his local library on the way home from school. When he asks to borrow a book, he is directed to Room 107 in the basement where a stern old man confronts him. Fearful, the boy says he is interested in tax collection in the Ottoman Empire and the man goes to fetch three large volumes.

The old man then leads him into a subterranean maze towards the reading room where he will be permitted to read the books. There the boy meets a sheep man who imprisons him in a cell. He is told that he has one month to memorise all three volumes, after which the old man intends to eat his brains once they have become ‘nice and creamy’ with knowledge.

With the help of sheep man and a mysterious voiceless girl, the boy makes a bid for freedom through the maze, but as they enter the library once more, they are confronted by the old man and a large black dog. The boy and sheep man manage to escape to the local park and as the boy rests sheep man disappears. Back home, he finds his mother waiting for him with a hot breakfast. He decides never to visit the library again.

In February 2005 an illustrated edition of The Strange Library appeared in Japanese (図書館奇譚 toshokankitan, published by Kodansha). This was then republished in January 2008 as a Kodansha Bunko edition. The illustrations are by Maki Sasaki.

In November 2014 The Strange Library was published in Japan by Shinchosha with illustrations by Kat Menschik Several editions then appeared in translation, including the ones listed below.

All content from Kiddle encyclopedia articles (including the article images and facts) can be freely used under Attribution-ShareAlike license, unless stated otherwise. Cite this article:
The Strange Library Facts for Kids. Kiddle Encyclopedia.