The Tale of Mrs. Tiggy-Winkle facts for kids

The Tale of Mrs. Tiggy-Winkle is a children's book written and illustrated by Beatrix Potter. It was first published in 1905. 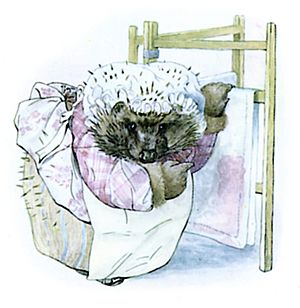 An animated adaptation of the story, shown alongside The Tale of Mr. Jeremy Fisher, was featured on The World of Peter Rabbit and Friends in 1993. The voice of Mrs. Tiggy-Winkle was provided by Prunella Scales.

A British wildlife hospital, Tiggywinkles, is named in honour of this story's titular character. It specializes in the care of injured hedgehogs. It is located in Haddenham, Buckinghamshire.

A 360-degree view from the summit of Catbells. Catbells is Mrs. Tiggy-winkle's address in the tale. The view north of the summit (middle of the image) takes in Keswick on the edge of Derwentwater. Potter was summering at Lingholm near Keswick during the development of Mrs. Tiggy-Winkle.

All content from Kiddle encyclopedia articles (including the article images and facts) can be freely used under Attribution-ShareAlike license, unless stated otherwise. Cite this article:
The Tale of Mrs. Tiggy-Winkle Facts for Kids. Kiddle Encyclopedia.