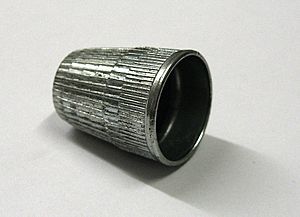 A thimble is a small, hard cup. People wear one on their finger for protection from the needle when sewing.

All content from Kiddle encyclopedia articles (including the article images and facts) can be freely used under Attribution-ShareAlike license, unless stated otherwise. Cite this article:
Thimble Facts for Kids. Kiddle Encyclopedia.