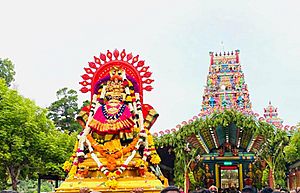 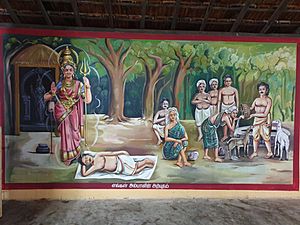 The history of the temple.It is the general believe that Tholpuram Valakkamparai Muthumariamman came on her own to this spot considering this to be suitable abode.Centuries ago it is believed that this place was full of bow trees,margosa and other trees.Even today we can see these trees in this area.

One sunny day a Shepherd boy when he was looking after his flock an old woman called him and wanted some water to drink.He agreed and gave some water from the nearest well.Then this woman asked this boy to take care of her hair to see whether there were lices and when this boy taped her hair he was shocked to see entire head was full of eyes and when the boy shouted for others that woman was not to be seen.

That night she appeared in the dream of this boy and ask him to construct a small cot for her.The next day the boy told about his dream to his friends and neighbours and made a cot and started to worship the God Amman.

In 1658 the Dutch and in 1976 the British so the period 1658-1796 was the last Dutch period.The book Jaffna history authored by A.Muthuthambipillai in 22nd July 1912 says that Saravanamuthu muthaliyar was Panchayathu judge and the place where he had his court is known as 'Sathiyakadu' which is in Tholpuram during that period Amman disease (masoorika disease)attacked the people violently and got permission from the Dutch Governor and built the Amman temple and started the prayer so the disease came down.

From all these and from records available more than 1500 people participated in this Tholpuram Valakkamparai Muthumariamman kovil pooja activities those days.

The main religious festivals including the Chariot festival at the temple are celebrated during June or July.

There is a large fully air conditioned wedding hall for the Hindu people.Also could be used for other activities.Maximum 500 people could be accommodated for wedding and other functions.This hall commenced functioning from 2015 to date.

All content from Kiddle encyclopedia articles (including the article images and facts) can be freely used under Attribution-ShareAlike license, unless stated otherwise. Cite this article:
Tholpuram Valakkamparai Muthumariamman Temple Facts for Kids. Kiddle Encyclopedia.