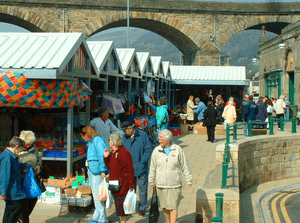 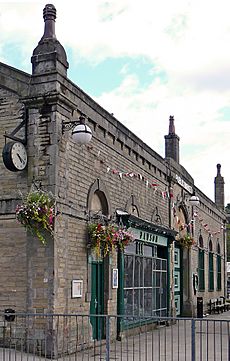 The outdoor market is open 9.00am to 4.00pm Wednesday, Thursday, Friday, Saturday and Sunday. Thursday is exclusively a second hand market whereas Sunday is a mix of general retail and second hand goods.

The two markets are operated by Calderdale Council.

The Market town of Todmorden has had a market since 1802 when it was held in land near White Hart Fold, following a town meeting in 1801. In 1868, the land on which it currently stands next to the Town Hall was bought by the Local Board.

In 1879, the Public Market Hall which houses over 40 indoor stalls was built by Dugdale of Hebden Bridge. In April 1879, Mr John Fielden, the chairman of the Local Board laid the cornerstone and on December 29 of the same year he opened the finished building.

In 2017, the main market hall was refurbished with £500,000 spent on new roofing, insulation and redecoration.

All content from Kiddle encyclopedia articles (including the article images and facts) can be freely used under Attribution-ShareAlike license, unless stated otherwise. Cite this article:
Todmorden Markets Facts for Kids. Kiddle Encyclopedia.