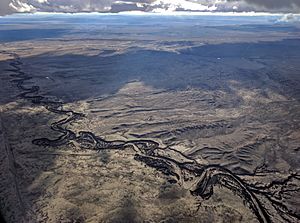 The Tohajiilee Indian Reservation (Navajo: Tó Hajiileehé [tóhɑ̀t͡ʃìːlèːhé]), formerly known as the Cañoncito Band of Navajos, is a non-contiguous section of the Navajo Nation lying in parts of western Bernalillo, eastern Cibola, and southwestern Sandoval counties in the U.S. state of New Mexico, west of the city of Albuquerque. It is a Navajo phrase roughly translated in English as "Dipping Water".

It was formed on the "Long Walk", during the forced relocation of Navajo tribal people, in 1864. Residents there claim that people who settled there, were considered (and still are, infrequently) a renegade band who refused to go further and settled in this part of NM known as the checkerboard, where both Pueblo and Navajo people share the land and live to this day.

It has a land area of 121.588 square miles (314.911 km²) and a 2000 census population of 1,649 people. The land area is only about 0.5% of the entire Navajo Nation’s total. The name comes from the Navajo phrase tó hajiileé, meaning “where people draw up water by means of a cord or rope one quantity after another”.

The To’hajilee Navajo Chapter was one of three Navajo Chapters, behind Nahata Dziil and Ramah, to adopt an Amended Navajo Flag which adds Ramah, Alamo, To’hajilee, Aneth, and New Lands or Nahata Dziil Chapters to the flag of the Navajo Nation created in 1968. The Chapter voted on September 16, 2014, by a vote of 27-07-02 by a resolution, which was presented by a man from Sanders, Arizona, named Marlon Murphy Begay.

All content from Kiddle encyclopedia articles (including the article images and facts) can be freely used under Attribution-ShareAlike license, unless stated otherwise. Cite this article:
Tohajiilee Indian Reservation Facts for Kids. Kiddle Encyclopedia.