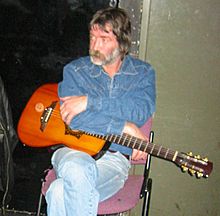 Tomaž Pengov (1949 – 10 February 2014) was a Slovenian singer-songwriter, musician and poet. He played a 12-stringed acoustic guitar and lute. He was born in Ljubljana, then part of the Socialist Federal Republic of Yugoslavia. He studied comparative literature at University of Ljubljana's Faculty of Arts.

Pengov died after a short illness on 10 February 2014 in his hometown of Ljubljana. He was aged 64.

All content from Kiddle encyclopedia articles (including the article images and facts) can be freely used under Attribution-ShareAlike license, unless stated otherwise. Cite this article:
Tomaž Pengov Facts for Kids. Kiddle Encyclopedia.