The Tornado is a wooden roller coaster located at Adventureland in Altoona, Iowa, near Des Moines.

The Tornado made its debut on July 4, 1978, during Adventureland's third full season. It was designed by William Cobb, and built by the Frontier Construction Company. Soon after its opening it was considered one of the top ten wooden roller coasters in the world. Even today after more than a quarter-century and the addition of many other rides and three other coasters, this is still Adventureland's signature ride. It has two trains, one red and one blue (as of 2020, there may just one train, the red train).

The name Tornado has special significance for the park. Adventureland was to open for its debut season in July 1974. However, a real tornado hit the park before it could open, and caused it to be delayed until August of that year. When the ride debuted in 1978, park advertisements exclaimed "Another Tornado has hit Adventureland!" 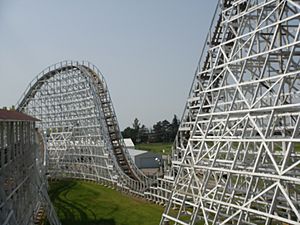 The layout of the Tornado is a unique 90 degree curved out and back that follows the shore of a small lake. After leaving the station, the train coasts down a small incline, around a curve, and heads up the lift hill to the top of the first drop. This drop, which is the largest in the ride, can provide for some air time depending on where riders are seated on the train. The second drop is considerably shorter, but leads into the third drop, which contains a "head-chopper" moment at the bottom as the track ducks under some support structures for the return track, which is immediately to the rider's left at this point in the ride. After drop three, there is one more small hill, by the Outlaw, and then the train rounds a banked turn and heads back to the station via three additional smaller drops.

Previously, during busy periods, two trains could be run at the same time. During two-train operation, the goal (for optimum rider throughput) is to have the second train ready to 'release' when the first train hits the midpoint of the track, which is the banked turn where the first train switches from "out" to "back". In case something goes wrong with loading, there is an extended covered area beyond the station with skid-brakes where the first train can stop and wait for the second train, if necessary. If this occurs, the second train will enter the station once the other train has started up the lift hill. However, due to safety restraints added to the ride, two-train operation is no longer possible due to the extra time required to harness the riders. The two trains are swapped mid-season.

All content from Kiddle encyclopedia articles (including the article images and facts) can be freely used under Attribution-ShareAlike license, unless stated otherwise. Cite this article:
Tornado (Adventureland) Facts for Kids. Kiddle Encyclopedia.