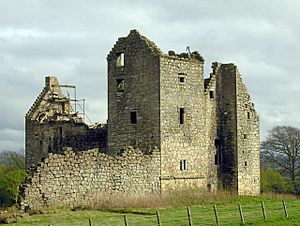 Torwood Castle is a ruined 16th-century L-plan castle near the village of Torwood, in the Falkirk Council area of central Scotland. It was designated as a Category A listed building in 1979. The Buildings at Risk Register for Scotland originally listed its level of risk as low, but raised that level to moderate in mid-2019 after seeing signs of continued neglect.

The estate was held by the originally by the Foresters of Garden, who were the foresters responsible for the nearby Royal Forest of Tor Wood from the second half of the 15th century until the mid-17th century. Based on the date found on a carved stone panel found not far from the castle in 1918, the castle has been estimated as being built around 1566 for Sir Alexander Forrester. It passed to Clan Baillie in the early 16th century and then to George, 1st Lord Forrester in 1635. The castle was captured prefatory to taking Stirling Castle during the 1585 successful rebellion of the Earls of Mar and Angus.

The castle was purchased by Gordon Millar in 1957, who slowly restored it, although he was only able to stabilise the stonework with help from friends . He created the Torwood Castle Trust before his death in 1998 to continue his work, but they were generally unsuccessful and ceased operations by 2015 , because of this a friend Gary Grant took over from the trust and from 2018 moved there and has continued with restoring the castle

The roofless castle is three storeys tall and comprises a vaulted ground floor, a first floor and an attic. The short wing housed the staircase and has gables at its north and south ends. It had a cobbled courtyard enclosed by three ranges of buildings, although little remains of them. Two rooms of the north range were excavated in 1999, revealing a kitchen and a well room.

All content from Kiddle encyclopedia articles (including the article images and facts) can be freely used under Attribution-ShareAlike license, unless stated otherwise. Cite this article:
Torwood Castle Facts for Kids. Kiddle Encyclopedia.